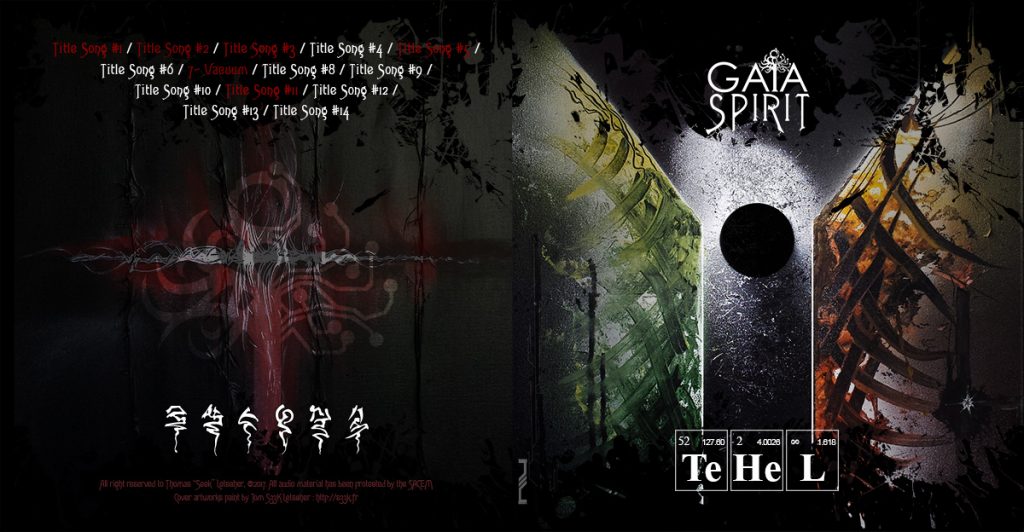 Here we are! a solo album. You could wonder why? First of all, Gaia Spirit becomes (again) my band (Alex has moved back in Nederlands & Fabien dedicated himself to a noble art which is the comics creation). I took this band evolution like an opportunity to express myself as composer, musician and singer (yes, I will…).

Anyway, I am very proud to invest myself in this project which for I already composed 5 of the 14 songs that will deal about things that appear important to me.

Long time ago (more than 15 years), I have imagined the Gaia Spirit concept for which I have written short stories. Those short stories were used to illustrate Bowels Of suffering (BOS) songs. This was the occasion for me to rent the gaia-spirit.com domain name, on which I created the BOS web site.10 years ago, I moved in Paris and the occasion to play were rare. I met Alex few years ago and the matching (as song writter) has been immediate. We looked after a band name for our project and I finaly proposed Gaia-Spirit. We produced 5 songs and 3 live and a lot of fun.

A lot of thing are changing around me and in my life, but music still remains my favorite expression way. That’s why I decided to release TeHeL, my solo album.

It can be seen as an egocentric delirium, but for 40 years I have learned a lot of things thanks to people that reveal themselves as important for me. We are living in a decadent world that lost the vision of his aim. The human kind is disturbed and drift between money, religion, esothericism and meaningless quests. I will simply quote Gojira:

My point of view is that each of us has to make himself evolve more than giving lesson to other. I do not want to give lesson but just sharing the light that I have found into me.

Here are the books !